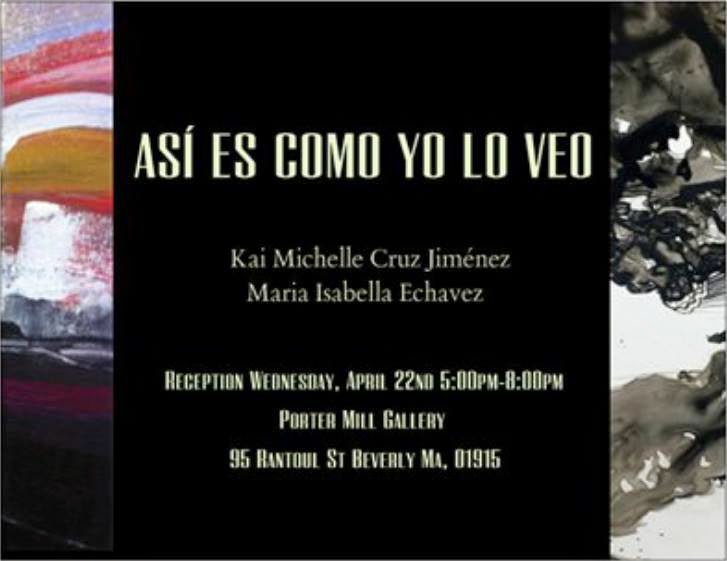 Our last Senior Thesis Exhibit is upon us featuring some extremely talent work from two excellent painters. Porter Mill Gallery and Montserrat College of Art is proud to present Así Es Como Yo Lo Veo, featuring Montserrat students Kai Michelle Cruz Jiménez and Maria Isabella Echavez. "Así Es Como Yo Lo Veo" translates from Spanish to English as "This Is How I See It." The works of Kai Michelle Cruz Jiménez and Maria Isabella Echavez sit side by side in this exhibit representing the middle ground that they occupy between language and culture. The nature of the mediums are seen prospering in both Cruz's ink works and Echavez's paintings. A connection to the natural is undeniable and can be seen in the organic forms and lines that are involved in this show.

Kai Michelle Cruz Jiménez, a Puerto-Rican artist raised in Lowell, Massachusetts works exclusively with ink on yupo. Focusing on openness and allowing the reactions of the ink to the paper lead her through the piece, she creates a place. These places rely heavily on gradients and mark-making, and they differ from full greyscale works to works with a hint of color. Large, looming, amorphous forms sit on a paper 5’ by 11’ while other forms sit in much smaller spaces of 5” by 6.” Each of Cruz’s works welcomes the viewer to this inherent feeling of neither here nor there.


Posted by Studios at Porter Mill at 6:00 PM

Hey there! Thanks for leaving a comment. If you have a specific question feel free to email us at studios.portermill@gmail.com. Thanks!