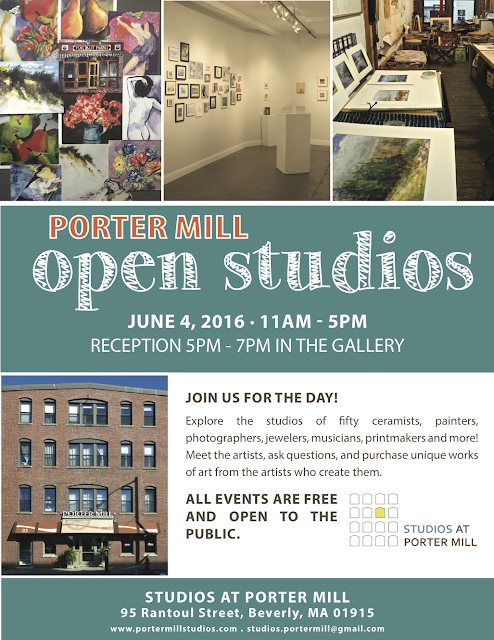 Our Open Studios is coming to Porter Mill! Come in and explore the historic Porter Mill building- see the studios of a multitude of amazing artists of various media, purchase unique works of art, and stop by our gallery to see the "Art of Porter Mill" show! Porter Mill is located on 95 Rantoul Street, Beverly MA 01915!

Have any questions? Email us at studios.portermill@gmail.com!

Posted by Studios at Porter Mill at 5:01 PM 0 comments

CALL FOR SUBMISSIONS! Women Artists and Writers - A Fundraising Exhibit to Benefit Amirah

A Fundraising Exhibit to Benefit Amirah 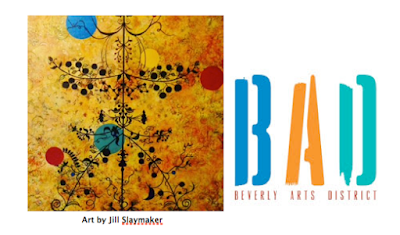 Event: Women Artists and Writers: Compassion, Creativity, and Courage; A Fundraising Exhibit to Benefit Amirah, a refuge for exploited women

See www.compassionanthology.com/submission-guidelines.html for details. Monies (submission fees and 40% of sales) go directly to Amirah, a refuge for women who want to break free from exploitation. Artists receive 60% of sales. This event is supported by the Beverly Arts District.
Posted by Studios at Porter Mill at 2:38 AM 0 comments


Eisner Award-winning team Braden Lamb and Shelli Paroline have been creating comics professionally since 2008. Coming up through the indy small press scene, they made a name for themselves by working on such high-profile series as “The Muppets” and “Adventure Time”, while continuing to create their own personal work.  They live and work in Salem.

Beverly-based artist Eric Boeker’s unique style is both comedic and thought-provoking. His “Commute of the Living Dead" has been in Dig Boston’s online comic section since 2010.  His work has adorned the walls of local hot spots such as the Atomic Cafe and the Gulu Gulu, and can be found at local art fairs.

Dirk Tiede cut his teeth in the independent comics world with a successful self-published graphic novel series and webcomic called “Paradigm Shift”.  More recently, his first all-ages comic, “STRANGER” was published last fall. He has been honing his skills as an illustrator and painter with a series of paintings that mimic classic animation production art, using several layers all traditionally.  Tiede uses a combination of materials both digital and traditional in his work to great effect.  Dirk also calls Beverly home.
“North Shore Comics Mayhem” runs from May 6th though the 28th at Porter Mill Gallery.  The opening reception is from 6-9pm on Saturday, May 7th. There will be refreshments, live music, books and prints available for purchase, and tons of amazing work to look at! Please contact the gallery for more information!
Posted by Studios at Porter Mill at 2:31 AM 0 comments